Father's Day is Sunday, June 20, and if there's one thing that every dad likes, it's food. (Yes, beer is a food.) Now that Denver restaurants have fully reopened, the upcoming holiday is the ideal excuse to skip cooking (and doing dishes), get out of the house and indulge in the specials that local spots are rolling out just for the dads in your life. 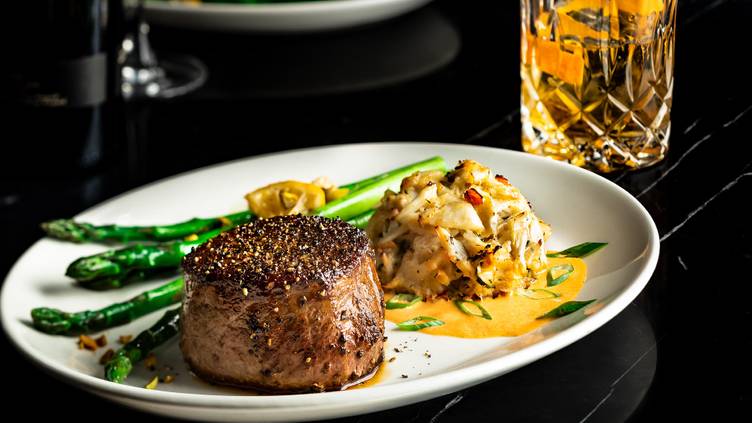 From brisket and bacon to brunch and bourbon, here are the tastiest ways to celebrate Dad this weekend:

The three-course Dad’s Prime Time Dinner is available for dine-in or to go and includes sous vide Neuske's bourbon molasses-glazed thick-cut bacon, a 22-ounce bone-in rib-eye with Woodford Reserve compound butter, and Jack Daniel's bread pudding with bourbon caramel sauce for $85. You can also add on a Woodford Reserve Old Fashioned for $18.

This food hall's vendors have all kinds of treats for Dad in one location. Try a chocolate and booze pairing with whiskey bonbons from Temper Chocolates and one-ounce pours of bourbon, whiskey, rye and Scotch from Curio Bar, available through June 20. Tammen's Fish Market has a take-home crawfish boil kit for four for $65, or you can opt for a make-your-own pizza kit for four from Vero for $22; both are available now through June 20. And on June 19, from 2 p.m. until sold out, the Local Butcher will be grilling on the patio.

After this past year, we could all use some laughs. Take dad out for a special night of comedy and beer at this special event on June 19 at 7:30 p.m. Comedian Alan Goodwin, who has appeared on national television including Laughs on Fox will be headlining. New Dry Dock brews Franconian Lager and Blood Orange Blonde will be on tap for the event. Tickets on Eventbrite start at $10 for general admission and tables for up to six are also available to reserve. 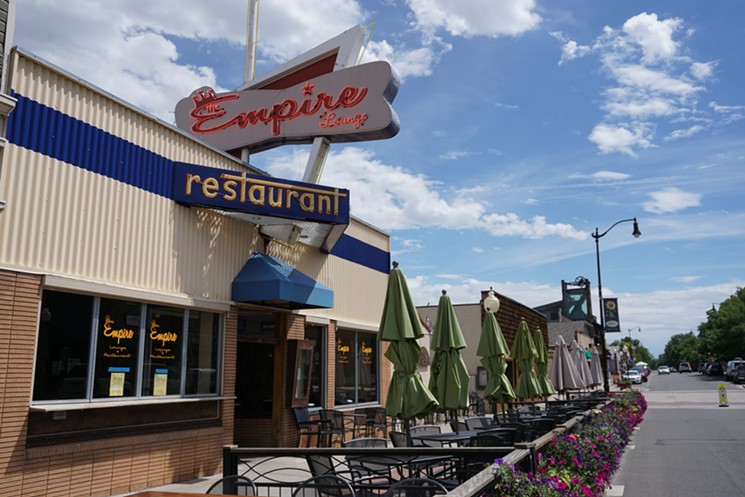 Head out of the city and to the Empire Lounge on June 19 or June 20 for a Father's Day special for two: For $90, you'll get a sous vide 32-ounce porterhouse with a selection of seasonal sides fresh from the Louisville farmers' market. Reservations recommended.

Grill at home with F'in Awesome Father's Day Grill Kits from Jax LoDo, Glendale and Boulder. You choose the protein (four filets, four scallop skewers, four tuna steaks, eight burgers or four salmon) and pair it with Caesar or wedge salad and veggies for grilling. The kit serves four and also includes a pint of ice cream and a six-pack of beer for $150. Pre-order online by noon June 18 for pick-up on June 19 from 10 a.m. to 2 p.m.

Along with its traditional brunch menu, this DTC eatery has a few specials just for Dad on Father's Day weekend. Chicken and waffles, what? Try housemade brioche with buttermilk and tarragon-braised chicken drizzled with a lemon-onion gravy paired with a Nicholas Feuillatte brut champagne. There's also a burger foie gras served with truffle fries and paired with a glass of 2015 Lions de Suduirault Sauternes. Reservations recommended.

If your dad's favorite karaoke song is "Tequila," take him to Lola for a free shot of Casamigos Mezcal with cinnamon and orange. Ready for round two? Go for the tequila and bites flight. For $18, it includes three snacks paired with three top-shelf tequilas: fried oysters with Chinaco blanco tequila, a birria taquito with Fortaleza reposado, and a grilled pork skewer with Olmeca Altos añejo. The Dad to Papa’s Plate for $46 includes a fourteen-ounce bone-in rib-eye steak with smoked fingerling potatoes, glazed carrots and green chile butter. Reservations are encouraged.

This modern spin on a ’50s diner in the new Rally Hotel at McGregor Square brought in its mixology team to create cocktails inspired by their own dads for Father's Day. Options include the Old Fashioned Kinda Dad, inspired by Lucas's father-in-law, Paul, with fat washed bourbon, beer simple syrup and olive bitters; Papa Lavender created by Ashley for her dad, Al, with Blanco Tequila, lime, lavender and agave; and the Beall-Vardier by Pete for his dad, Sam, with bourbon, sweet vermouth and Campari.

If dad is a bowling pro, take him to Punch Bowl — where he'll score a free entree if he gets a strike. He can pair his food with a $5 Old Fashioned, available all day. 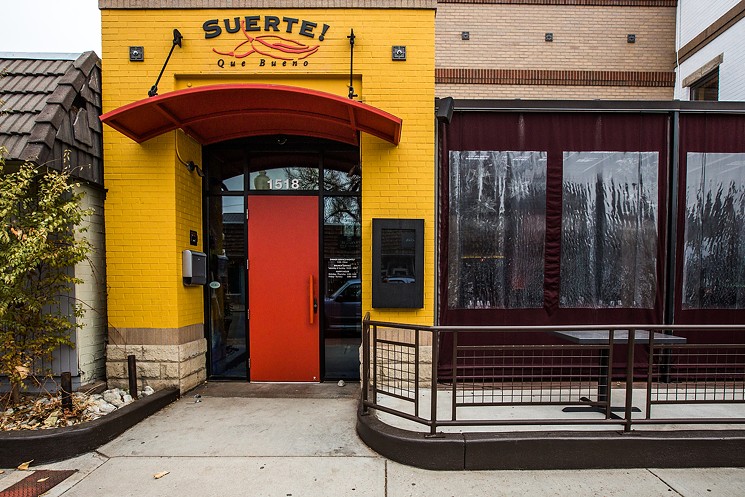 Let the kids feel like they're "buying" Dad dinner at this modern Mexican restaurant. On Father's Day, dads get a free entree and a glass or bottle of beer all day. Reservations are required to redeem this deal.

Our 2021 Best of Denver winner for Best Colorado-Style Barbecue is rolling out some special Wagyu brisket packages for Father's Day. Choose from the Cave Man (just the meats) with a one-pound Wagyu brisket, one pound of chopped pork and half a rack of pork spare ribs for $69. For $85, the Father of the Year also offers the brisket and pork along with two sides, cornbread or white buns and thee housemade barbecue sauces. The ultimate feast, the Super Hero Dad, includes the brisket, pork, bison green chile sausages, three sides, bread, sauce and dessert for $105. Call to place your order.

Go whole hog for Father's Day at this brewery's annual pig roast which returns this year. On June 20 from 2:30 to 7:30 p.m. G Wagon will be on hand with all the meat and sides for a Sunday feast. Plates are $30 and include a pound of pork, sides and a pint of beer.

Take your outdoors-loving dad to a feel good, whole hog feast. One dollar from every Jack Daniel's drink sold during this June 20 event will be donated to Conservation Colorado, whose mission is to protect Colorado's outdoors for future generations. You can also buy three-dollar raffle tickets (100 percent of proceeds from those go to Conservation Colorado) for a chance to win such prizes as a $500 gift card to Proud Souls BBQ & Provisions

Roll into Father's Day like a pro with lobster roll kits from Steuben's Uptown that include fresh Maine lobster, split-top buns, butter, mayonnaise dressing, pickles, lemons and house made chips, available in a two-pack for $60 or a four-pack for $120. Pre-order online by June 18 for pick-up on June 19 or June 20. If you opt to dine in, try the Father's Day special dessert, a bourbon caramel ice cream sandwich with bacon chocolate chip cookies, for $8. The dessert is also available at Steuben's Arvada, as are take-home barbecue feasts.

Go bottomless for brunch with dad on Sunday, and we're not talking about your choice of outfit. Food and beverages are never-ending at this brunch every weekend, but on June 20 from 10 a.m. to 2:30 p.m., three special menu items will also be included (these items are also available a la carte): coconut & mahi ceviche, beef brisket skewers and churros with chipotle cajeta and yuzu raspberry sauce. Bottomless brunch is $35 per person for food only or $54 per person for food and booze. 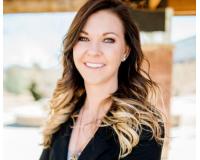 My name is Crystal Hart, I am a Colorado Native! I grew up in the San Luis Valley, located in south central Colorado, and have lived in the Denver Metro Area since 2000. I have over 20 years of experi....

8 Actual Fun Things to Do in Denver This Weekend

Fun Things to Do in Denver This WeekendChristmas in July, anyone?Denver will be rocking, dancing, and celebrating this weekend. We will also be Christmas in July-ing, muddy obstacle-ing, and Ferris

8 Fun Things to Do in Denver This Weekend

Fun Things to Do in Denver This WeekendSummer festivals and more.Just how grand are the events in Denver this weekend? I used the word ‘animatronic’ twice in this write-up, so yeah, it

All the Actual Fun Things to do in Denver This Weekend

By registering, you agree to our terms of use and that real estate professionals and lenders may call/text you about your inquiry, which may involve use of automated means and prerecorded/artificial voices. You don't need to consent as a condition of buying any property, goods or services. Messages/data rates may apply.